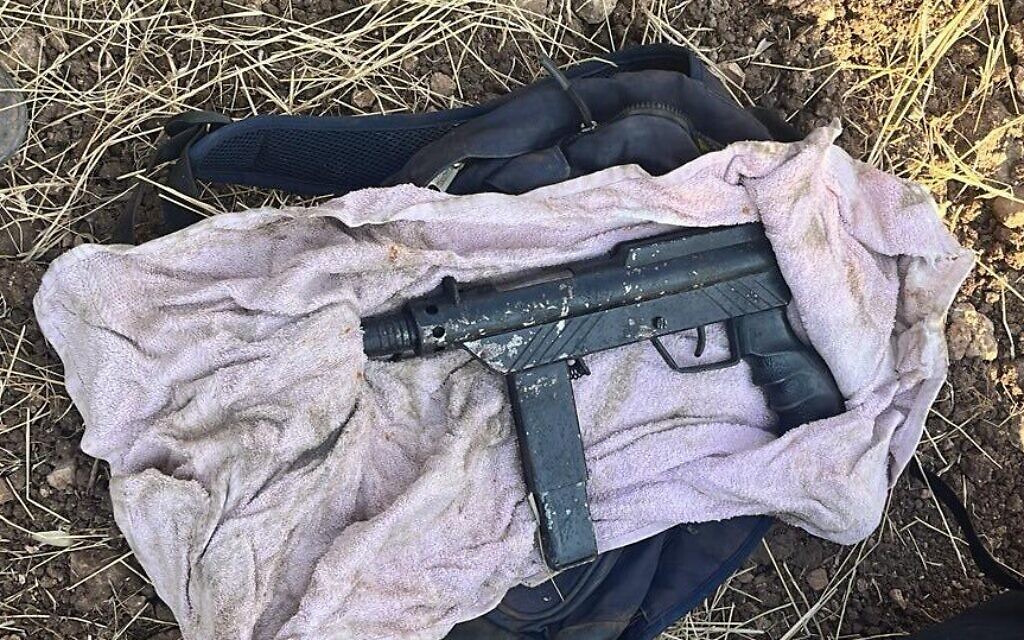 The Israel Defense Forces said on Sunday that their troops arrested two Palestinian suspects at the West Bank security fence near the Arab Israeli town of Baqa al-Gharbiye, one of whom was armed with a submachine gun.

According to the IDF, soldiers using surveillance cameras spotted the two men trying to break through the West Bank security fence near the Baqa checkpoint that separates the Israeli town from the Palestinian village of Baqa a-Sharqiyya.

The IDF said troops were dispatched to the scene and arrested the two men. One of them was carrying a makeshift Carlo submachine gun in his bag.

The couple was taken in for questioning by the Shin Bet security agency. It was not immediately clear if they were planning an attack or looking to sell the weapon.

The IDF added that a third suspect was arrested nearby shortly afterwards. He would not have been armed.

Hebrew-language media, citing the IDF, said the two men either planned an attack in Israel or were going to sell the weapon for someone else to carry out an attack.

In its statement, the IDF did not specify its alleged intentions.

Last week, an Arab Israeli was shot and seriously injured by Israeli soldiers during an alleged smuggling attempt along the security fence near the Arab Israeli town.

Early Wednesday morning, an Israeli officer was killed in a shootout with two Palestinians along the security fence in the West Bank. The couple, armed with makeshift firearms, were also killed in the clash.

The IDF has sent thousands of troops in recent months to the seam area to prevent Palestinians from crossing into Israel. Although part of the barrier is a concrete wall, much of it is just a fence.

In recent years, thousands of Palestinians have entered Israel daily through breaches of the fence to work, but the IDF has vowed to suppress, after several terrorist attacks earlier this year were carried out by Palestinians who used the breaches to reach Israeli cities.

Israeli troops have repeatedly come under fire in nighttime raids in the West Bank, during a months-long effort against Palestinian terrorists. The military launched the operation after a series of deadly attacks that left 19 dead between mid-March and early May.

More than 2,000 suspects have been arrested since the start of the year, according to the Shin Bet security agency.

You are a dedicated reader

We’re really glad you read X Articles from The Times of Israel over the past month.

That’s why we started The Times of Israel ten years ago – to provide discerning readers like you with must-read coverage of Israel and the Jewish world.

So now we have a request. Unlike other media, we don’t have a paywall in place. But since the journalism we do is expensive, we invite readers to whom The Times of Israel has become important to support our work by joining The Times of Israel community.

For just $6 a month, you can help support our quality journalism while benefiting from The Times of Israel WITHOUT ADVERTISINGas well as access Exclusive content only available to members of the Times of Israel community.

Thanks,
David Horovitz, founding editor of The Times of Israel