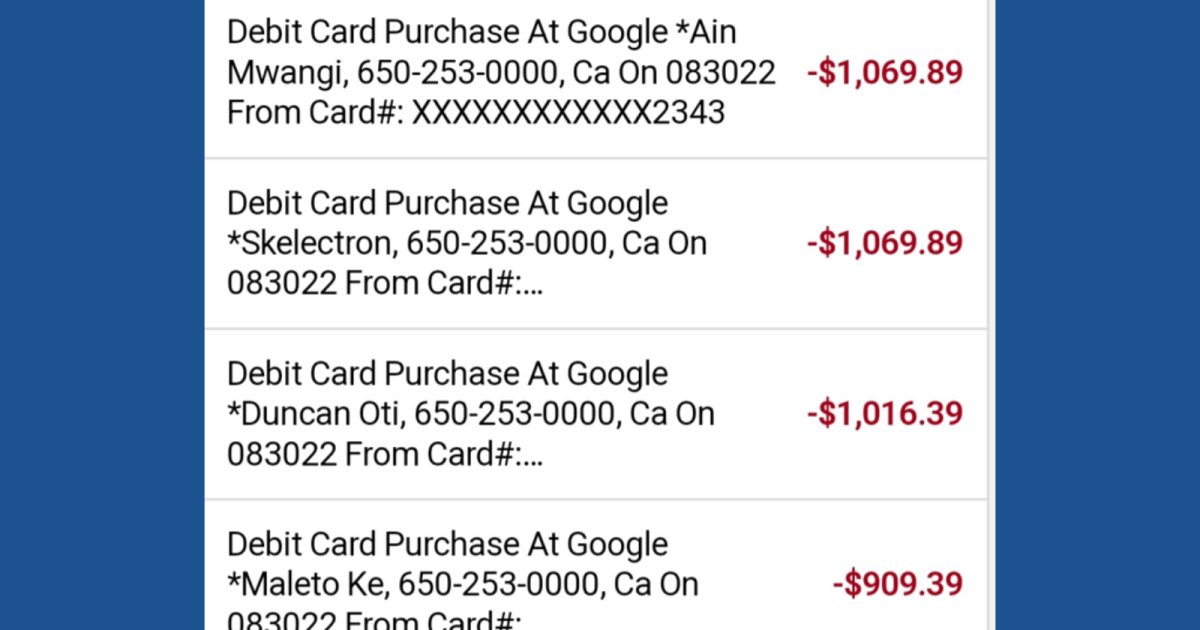 A scam involving unauthorized Google charges is hitting bank accounts across the country, including right here in Indiana.

The charges are totally bogus but seem to come from Google and Google Play, and there’s usually more than one on your credit or debit card.

Anita Caincross from Martinsville went out to dinner with a friend, and when she went to pay with her debit card, it didn’t go through.

“I checked my account, and it was literally zero,” Caincross said.

She found four separate charges totaling $4,065 that appeared to be from Google, with names next to each charge that Caincross did not recognize as “Duncan Oti” and “Maleto Ke.”

“I was angry,” Caincross said. “What happened here?”

“I had a car payment and a house payment, and I’m never behind on payments like that,” Caincross said.

Caincross contacted Google, but she says the company refused to reimburse her.

So she contacted her bank, Fifth Third, who waived the charge.

“I canceled the card and filed the dispute,” Caincross said.

WRTV investigation found customers of other banks across the country who have also been hit with bogus Google accusations.

This Reddit Blog shows dozens of people who have suffered fraudulent Google charges.

“You might not think twice if you see Google, which is why you really need to dig in and see what those fees are,” said Jennifer Adamany, spokeswoman for the Better Business Bureau Serving Central Indiana. “Go to your Google account and see what you’re subscribed to and see if something’s wrong. You have a better chance of stopping it early.

The best thing to do is to regularly check your bank statements and look for unauthorized charges, even if they are small.

“Keep an eye on it early on so you can stop it before it reaches larger amounts,” Adamany said.

“It’s important to be careful when using your debit cards online or anywhere because your information is extremely vulnerable,” Caincross said. “They can wipe you out in seconds. You have to be hyper-vigilant.”

WRTV Investigates has contacted Google via email and phone and we are still awaiting a response.

We have not seen any specific increases related to this scam, however, Fifth Third takes fraud very seriously and continues to monitor trends and mitigate risk for our customers. Customers should always report any fraud as soon as possible to Fifth Third. They should also continue to be alert to SMS and email scams.

There always seem to be new (and old) ways to scam people. People usually get these types of fake messages claiming to be from different banks so people need to be careful no matter where they are banking. Here are some tips we provide regarding scams:

If customers have a question/are suspicious of an email, phone call or text, contact Fifth Third directly for assistance.