BigPay today announced the launch of cash pickup services in Indonesia and the Philippines, a new addition to its existing money transfer services. Called ‘Cash withdrawal‘, this new feature allows BigPay users in Malaysia and Singapore to send money to recipients in the aforementioned countries even if the recipients do not have a bank account.

In a statement today, the Southeast Asian fintech company said Cash Pickup allows the recipient to collect cash from more than 14,000 the location of the pickup partner of their choice in both countries. Also, the feature was added due to the fact that Indonesia and the Philippines have a large unbanked population and the two countries are the strongest corridor with the highest number of outbound remittances from Malaysia. and Singapore as part of BigPay. 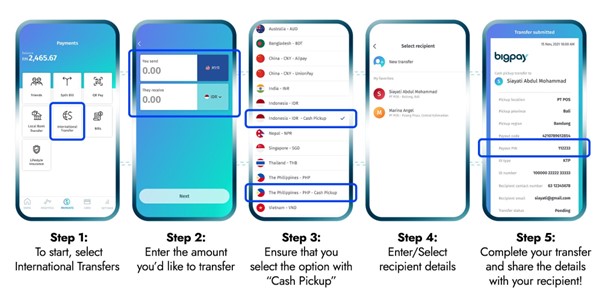 BigPay claimed to believe in a world without financial borders where everyone has fair access to the products they need. Additionally, the company hopes this new feature will help bridge the technology gap and help families access their funds without needing a bank account.

To send money through the BigPay app, users only need to select the amount to deposit and the withdrawal location. Recipients can then go to the designated pickup locations within the specified time, provide the unique PIN and ID to receive the funds that have been sent.

For those who want to test this feature, BigPay will not charge any transfer fees for your first BigPay international transfer via Cash Pickup. Previously, you could already send funds to recipients’ bank accounts in Indonesia and the Philippines, with the transfer taking just 5 minutes to receive for most Southeast Asian countries.

So what do you think of BigPay’s new Cash Pickup service? Share your thoughts with us in the comments below and stay tuned to TechNave for the latest tech news in Malaysia and beyond!