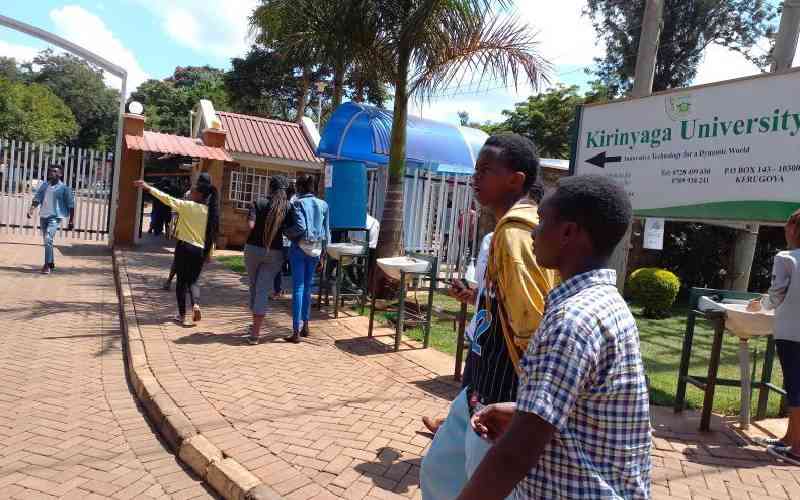 A report by the Office of the Auditor General (OAG) for the period 2019-2020 revealed that the university had balances of 94,714,985 shillings in cash and bank deposits at the end of the financial year in June 2020.

“However, the National Treasury’s authority to operate the seven commercial bank accounts has not been provided for audit review, contrary to section 28(1) of the Public Financial Management Act 2012, which stipulates that the National Treasury authorizes the opening, operation and closing of bank accounts and sub-accounts for all national government entities. Under these circumstances, the University has broken the law,” Gathungu reported in his report of November last year.

However, Kirinyaga University, although marked as having an unbalanced budget, may then have been among the few public universities not to suffer from cash flow problems, according to the report.

“The University’s budget was out of balance contrary to Regulation 33(c) of the Public Financial Management (National Government) Regulations, 2015 which states that the budget shall be balanced.”

Aid appropriation refers to any revenue that a state government entity receives and is approved by the legislature by that entity to fund its activities.

“However, the approved budget reflected an amount of Sh154,148,475 with respect to AIA resulting in a variance of Sh58,349,905. The variance was attributed to increased student enrollment resulting in an increase in fees.

However, the auditor noted that this was not approved by the National Treasury for expenditure in the 2019/2020 fiscal year, meaning the institution was in breach of the 2018 directive that state-funded corporations by the National Exchequer should consult with their line ministries and ensure that the budget proposals do not exceed the ceilings of the line ministry.

The university had a complex tuition fee project of 309.9 million shillings covering a contract period of 78 weeks commencing March 14, 2017, with an expected completion date of September 28, 2019. The completion period planned had been revised four times and totaled 145 weeks at the time of the audit.

Another project was for the construction of an amphitheater at 149.2 million shillings over a period of 52 weeks from 29 May 2017, with an expected completion date of 28 May 2018. This was later revised to 178, 9 million shillings and the expected performance period revised five times to 202 weeks.

“The university stands to incur additional costs due to inflation and may not get value for money on both projects as the facilities have not been commissioned as planned.”

She also reported an expense of 4,631,687 shillings for University Council remuneration, which included an amount of 1.6 million shillings for sitting allowances.

The Auditor General also reported a lack of regional balance in staffing, with 181 (77%) of the University’s 235 employees coming from the dominant local community.